Why Do People Love Cats/Devilgram 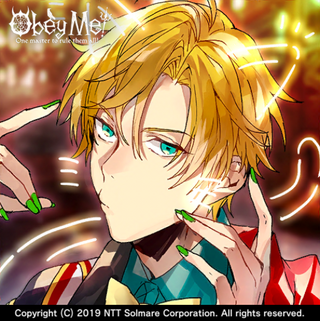 Mammon and Asmo are cheering for Beel at a sportsgame in the RAD Colosseum. Lucifer is there too, wondering where Satan is. Mammon said he had looked for him earlier this morning, but couldn't find him. Even Levi is present, though not by choice— someone dragged him out of his room this morning to watch Beel’s game. While he complains about it, Lucifer asks in his scary voice if Levi is saying something. That makes Levi quieten down. Asmo then spots Satan with the team, talking to Beel's coach.

Asmo starts texting in The Demon Brothers group chat. Satan is surprised that they are all here too and that the brothers are just as surprised that Satan is talking to the coach, like he is a coach himself. Satan explains that he is friends with the owner of the team and the coach. The brothers ask Satan why he didn't invite the rest of them to sit in the coaches area, but he didn't think of it as a big deal. They then ask him if they can join him right now, but Satan stops them, saying they can't have such a big group of spectators in the coaches area, so he will come sit with them instead.

Lucifer Satan does show u…

When Satan joins the others, he points out that their places have a perfectly good view of the game and there was no need for them to come sit in the coaches area. But Levi and Asmo disagree. Though they have different reasons, they felt it would have been really special to sit and watch a sportsgame from a seat so close. Mammon then asks Satan how it is that they often find him in the most unexpected places. Lucifer agrees, comparing Satan to a cat. All the other brothers agree with that observation. Levi gives an example of Satan being in the front row of a live concert, jealous that Satan was there when he had to watch the concert on video.

Mammoney He's a fickle on…

Satan brushes it off, but Levi tells him it was opening night and that he couldn't get a ticket for it, so how did Satan get to be there? Satan says he was invited by the promotor. Asmo and Mammon then give their own examples: Satan eating at a restaurant where reservations were needed for entry, and sitting in one of the best seats at a wrestling tournament. Satan answers that he was invited by the restaurant owner and also by the champion of the tournament. Levi wonders how Satan knows so many people and he answers that since he goes out alone, he always meets new people who often invite him. This way he has a lot of experiences and can expand his territory. Satan leaves the game after the first half: he has another appointment planned. Just like a cat, concludes Asmo.