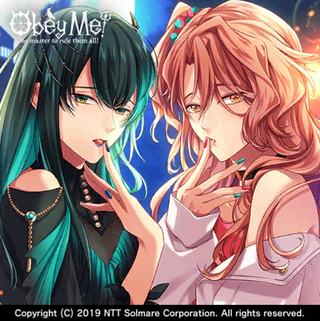 Before the Queen Rose’s visit, Asmodeus asks MC if they want to go with him to the Demon Lord's Castle. He heard that Barbatos played the role of a Dame once and apparently was so beautiful that it caused a huge panic across the Devildom. Since Asmo wants to improve as a Dame himself, he wants to ask Barbatos to teach him his secrets.

Beelzeburger I wanted to see too.

In the Demon Lord's Castle, Asmo approaches Barbatos and asks him about his time as the legendary Dame. Barbatos doesn’t deny having played the role, but is surprised that Asmo heard about it. Asmo doesn’t want to reveal his sources, though Barbatos confirms that the rumour is true. If MC finds it hard to believe, Barbatos agrees as he himself doesn’t understand how he became so popular. He doesn’t agree to dress up anymore as it caused a huge chaos and trouble before and hindered his work, so he swore to never become a Dame ever again. As Asmo (and MC, if they choose so) beg him to help out, Barbatos finally agrees.

L3V1 The video would go viral.

Barbatos starts with make-up and Asmo is impressed by his skill. Barbatos gives him some tips on how to use foundation better and how to apply eyeliner. Once Barbatos is done, both Asmo and MC are stunned by his transformation. Barbatos tells Asmo to try too.

stn This is very helpful.

Asmo starts to prime his skin before applying his make-up. He lays foundation and eyeliner according to Barbatos’s advice. The latter confirms that Asmo is doing well and a while later, Asmo finishes his preparations, but Barbatos isn’t entirely pleased with the effect. He admits that Asmo looks great but is a bit too flashy - Asmo notices that too. Barbatos then advises Asmo to use less eyeshadow and offers Asmo and MC some tea during their break. Asmo admits that even watching Barbatos is a learning experience for him, but soon notices that MC isn’t looking at him but at Barbatos only and gets upset about it. Asmo demands to know who is prettier in MC’s eyes: him or Barbatos. The choice slightly changes the ending as Asmo is either pleased with MC’s choice or motivated to surpass Barbatos. MC can also refuse to choose one.