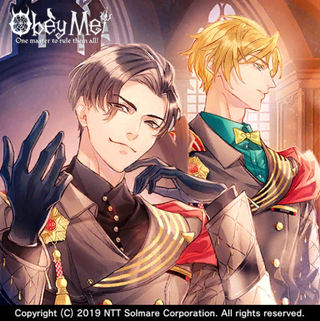 Lucifer and Satan are awaiting something, both looking angry. Outside of the chamber Mammon is worried about leaving the two alone. Asmo tells him that at least for now they’re not even talking to each other, but Levi points out that it’s only a matter of time until the two blow up. He left his room for one reason - to watch what is happening since it’s a rare occurrence that Satan and Lucifer have to work together alone. A flashback appears - Diavolo assigned them to assist a visiting witch, a very powerful and influential one - Great Witch Maddi.

DDSimeon Oh no, that witc...

The Great Witch Maddi has a peculiar personality according to Satan, and possesses such huge powers it’s hard to believe she’s human as Lucifer says. She has specifically requested for Lucifer and Satan to be escorts during her visit as they both seem to be her type. Diavolo however says he will not be present during the visit as he’ll be busy - but Lucifer points out that he just doesn’t want to interact with the witch as he never liked her. Diavolo admits that it’s the reason but still asks the two to accompany the witch. The scene comes back to the present. Satan wonders how Maddi managed to make someone as tolerant as Diavolo dislike her.

AsmoBaby THOSE two are wo...

Lucifer explains to Satan that Diavolo’s dislike of Maddi comes from very long ago when she refused to go back to the human world until he agreed to marry her. She was very forceful and aggressive and difficult to convince to give up. Satan notices that this must mean that she’s surpassed a normal human lifespan for long centuries but Lucifer warns him not to mention her age around her. Satan wasn’t planning to. A while later they still await her arrival and Lucifer is getting annoyed - he claims it’s a human custom to arrive 5 minutes early. Satan however points out how limited Lucifer’s knowledge on the human world is as in some places it’s actually polite to arrive late. Lucifer talks back to Satan, taunting him about his alleged nervousness. They start arguing.

Lucifer warns Satan that Maddi doesn’t take no for an answer. Satan recalls how Mammon once went with her only to come back traumatised. Lucifer remembers it as well and mentions with a smile that Mammon had nightmares after that and even stopped spending money. He admits that the witch is attractive and taunts Satan again, claiming that he’s worried that Satan will end up like Mammon which evolves into another argument. In the corridor Mammon and Asmo start getting nervous, Levi notices that Lucifer was deliberately trying to anger Satan. As the argument starts escalating into a regular fight, Mammon and Asmo decide to intervene, but before they can do anything, the Great Witch Maddi arrives. Lucifer and Satan immediately drop their fight and greet her in perfect sync, much to the eavesdropping brothers’ relief. Diavolo shows up right behind their backs, saying that there was nothing to worry about.