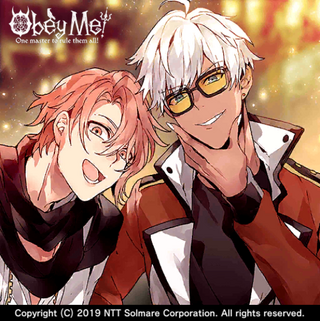 Leviathan defeats Solomon in a card game - Magic: The Gate. He’s been working day and night on his deck and strategies, and studying every possible outcome in the game. Asmodeus complains that he thought that Solomon would stand a chance, but Solomon admits that the scale of the loss surprised even him. Mammon tries to insult Levi’s dedication, but Levi isn’t listening - he just considers him a sore loser. Asmo admits that it’s the first time he has seen Levi this confident, but Mammon demands a rematch.

Leviathan is fine with a rematch so Solomon suggests a new tournament with Levi as the final boss. Mammon offers to form a team with Asmodeus - Asmo isn’t happy with that but agrees as they’d make up for each other’s weaknesses. Asmo is a good strategist, but isn’t good at reading his opponents and panics and starts to make errors when something unexpected happens. Mammon on the other hand has no head for planning but can predict his opponent’s moves and think quickly.

Mammon and Asmodeus join the tournament as a team, but Leviathan laughs at them since they still don’t have any chance in his eyes. He agrees to the wager that Mammon suggests due to his certainty of his win. Solomon is okay with everything as Mammon and Asmo were so bad at the game that he thought about giving them some kind of advantage. The tournament starts and the team quickly defeats Solomon, who is stunned by how well it worked out for them.

Mammon and Asmodeus take on Leviathan in the last game of the tournament and win over him with ease. Levi is shocked by their victory - though as Solomon explains, it was mostly because he was overconfident, giving his opponents an opening to exploit. Levi demands a rematch and Mammon uses it as a chance to raise the stakes to 12 bottles of gold Demonus for the winner’s use. Levi hesitates as he could fill his room with photo books of his favourite star, but ultimately agrees as he needs to regain his throne. Mammon and Asmo are confident but unfortunately for them, Lucifer appears. He had been notified about the competition by Solomon and joins Levi, much to Asmo’s and Mammon’s despair as they expect to be defeated.