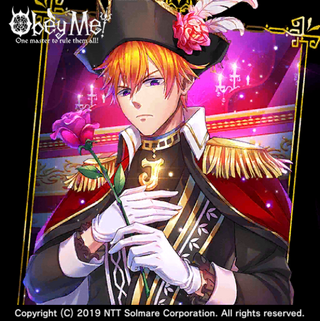 Beel finds MC in the common room and invites them to play a card game with him. Beel just found a deck when he was looking for food and thought MC would like to play a game of memory. MC accepts the challenge and they go to Beel's room to play. At the end of the game however there is only one card left, so they are missing one card: the jack of spades.

Mammoney Don't tell me it's in your gut!

Beel and MC go look for the card everywhere in the room, but they can't find it. They even go back to the common room to look for it, but no luck. Seeing Beel and MC so busy searching, Belphie asks them what they are doing. When Beel explains there is a card missing, Belphie tells them he knows how to fix it.

stn To think Belphie has such talent...

Belphie suggests to just draw a new jack of spades, so he starts drawing it. It doesn't look like much however. Beel is nice about it, but MC makes fun of the drawing. This offends Belphie and he tells them to just do it themselves, if they can do better. But instead, Beel is starting to feel hungry, which reminds him he might know where the card could be.

AsmoBaby Let's do it all together nex...

Back in the kitchen, Beel said he remembered when he found the deck he wanted to see MC right away. But on the way looking for MC he went by the kitchen first, so maybe the card is in there somewhere. They start searching the kitchen and eventually find the card under the plate where Beel was eating a pie from. They want to play another game together, but Beel is feeling really hungry now. He collapses on top of MC. Depending on the choice, MC can be nice about that or tell him to get away. Then MC tells Beel that before they play another game, he should really eat something first.