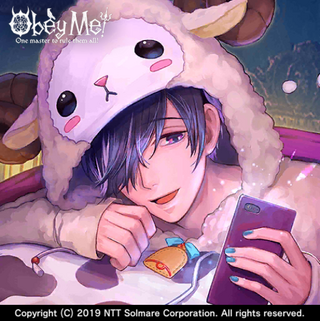 Belphie comes to MC's room to ask them for a favor. He tells MC how he knows he has a tendency to oversleep and when he talked to Levi about it, Levi told him it's easy to wake up at the sound of your favorite voice. So Belphie asks if MC is willing to make a recording of their voice as a wake-up call and MC agrees to do that.

Mammoney I want one as well!

Belphie and MC start discussing what kind of wake-up call it should be: something strong or something gentle? They end up deciding they'll just record a couple of different kinds, so Belphie has some choices. He thinks every one of them is great and he is looking forward to waking up, for a change.

Having fun, Belphie says he wants to record a couple more, since he is here now anyway. MC agrees to do it and Belphie says they should record a couple of wacky ones. Then he wants to test out the recording. Saying he's going to take a nap in MC's room, Belphie tells them to wake him up in three minutes, or let him sleep if the wake-up calls don't work. MC agrees to do that and Belphie says he has a feeling he will have no problem waking up. Then he says goodnight and falls asleep immediately.

Lucifer You could say it's a miracle.

While Belphie is sleeping, Levi enters MC's room, bringing a DVD. He sees Belphie sleeping and tells MC they'll never able to wake him now. Then MC plays one of the recordings. Levi has a different reaction to each recording - he thinks the gentle one is cute and the strong one startles him. No matter which recording plays, Belphie wakes up immediately and blushing. Belphie says as soon he heard MC's voice, he woke up. Levi is very surprised that Belphie woke up to an alarm. But Belphie explains it was Levi's idea to begin with, so it's not that surprising. Levi wants to do a recording of MC's voice as well, but either MC or Belphie tells him no. After Levi has left, MC can ask for a recording of Belphie's voice as well. He will only agree to do it if he gets a kiss.