Lured by a Majestic Deer/Devilgram 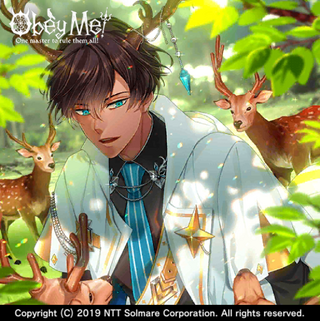 Lucifer Even the improvising was...

During filming of the animal movie, the time for Simeon's and MC's scene has come - in this scene he comforts them since they're the sole human in the world and they're feeling lost and anxious. Before the scene starts, Simeon notices that MC is out of it and asks if they're nervous. Whether they are or not, he admits being nervous too and tries to calm down with them. The scene starts - he was looking for MC since they left the group on their own and everyone was worried. He understands it's scary being a lone human but tells them that the species doesn't matter as they're both living beings. He also tells them to touch his cheek to feel the warmth. It wasn't in the script though - MC can choose to improvise or freak out, which decides how the filming goes.

Angeluke An angry Simeon is frightening.

In the next scene the animals are arguing as they don't approve of Simeon's idea to team up with the canines and MC intervenes to calm them down. After the filming of the scene is done, Simeon tells MC that he's glad it's over as he doesn't like arguing even if it's just acting - he claims he's not good at getting angry. MC can then ask him for acting tips.

Since it's time for another scene, Simeon and MC have some time off. He suggests taking a walk around, but cannot relax on the walk as his deer outfit attracts attention. If MC compliments how he looks, he claims he doesn't mind. Then he wonders how it would be to have antlers in normal life, would they be useful or rather get in the way. Depending on their answer, he mentions ways the antlers could be bothersome or useful. He asks MC what animal they would like to be. If they choose to stay human, he expresses his awe in humans. If a deer, he mentions deers rub their antlers together to show affection. If a carnivore, he says they'd eat him as he's a deer, but also fantasises a bit about a forbidden herbivore-carnivore relationship. Then they go back to prepare for the next scene.

The battle scene is exhausting and by the time it's done, everyone's drained. Simeon approaches MC to thank them for their hard work and sits down to take some rest. He contemplates on how long it takes to make a film in comparison to watching it, and how different it is from performing on stage. He asks MC if they'd prefer acting in a play or in a movie. He starts dozing off to sleep and MC can choose to kiss him. After they've both finished their task, he takes them on a walk and lies down on the grass at the nearby lake. MC joins him and can choose to either put a flower to his antlers or stroke his hair. He wants to kiss MC which they can accept or reject. He claims he would do everything to stay with MC forever.