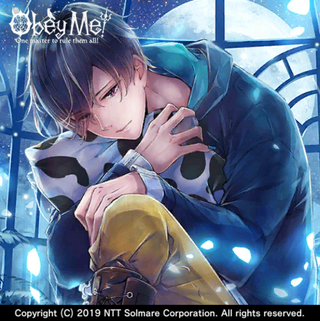 Beelzeburger I want to go...

Belphie, still trapped in the attic, listens to MC telling him about their day, which makes him miss school. Belphie wishes he could go to school - but knows such wishes are pointless since he's locked up. He proclaims his hatred and disgust towards Lucifer, claiming that Lucifer took everything from him. He then starts to reminisce of the times when he didn't loathe him.

In a flashback, Mammon suggests the brothers play a game of "Who Am I", a game where they try and guess who each other are by giving hints. Asmo is the first to guess, and Mammon and Beel are seen giving him hints. Belphie practically gives away the answer on his turn, telling Asmo that it is their little sister. Levi tells Belphie off, who feels bad for it.

Mammon scolds Belphie, telling him to get a grip on the rules. Lucifer defends him saying that Belphie's just not used to the rules yet and reassures Belphie that the same hint ran through his mind. Continuing the game, Levi guesses that he is Mammon. Next is Beel's turn and the brothers give him hints. Even though Asmo is sure that Beel knows who he is, Beel asks Belphie for a hint. Belphie says that he is the smartest and someone he can count on most, their genuinely awesome older brother. Levi and Asmo grumble at Belphie's obvious hints. Beel proudly says he is Lucifer, thanking Belphie for his hint. Asmo tells Lucifer to not look so smug.

Lucifer So that happened...

Finally it's Lucifer's turn, and even though he probably already knows who he is as the names they're guessing are all them, but they give hints anyway. After hearing the hints that are obviously pointing at Belphie, Lucifer asks Belphie for what he thinks. Belphie says that he loves Lucifer. The other brothers get jealous of that hint, wishing he'd say something like that to them as well. Lucifer proudly says that he is adorable little brother Belphie. Back in the present, MC brings Belphie out of his memories, asking if he fell asleep. Belphie says he did, continuing their conversation from before, repeating that he hates Lucifer, but this time looking heartbroken.