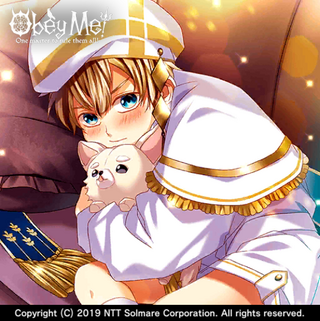 stn I was told I can't have pets.

MC is at Purgatory Hall trying Luke's madeleines with Solomon when Simeon returns with three dogs. He got the dogs from Lucifer, who will be away for the night and so asked Simeon to look after them. MC and Simeon coo over the cute dogs and Simeon asks Luke if he would like to care for them. Luke is reluctant to do know, as the dogs are Lucifer's. Furthermore, he doesn't know how to take care of dogs. MC can tell him the dogs likes him while Simeon agrees, saying that they will get on very well together. Luke finally agrees to the task and brings them to his room. He introduces himself and MC to the dogs but the dogs, to his dismay, start chewing the sofa and tearing up the wallpaper.

AsmoBaby He made Luke go for a walk.

The dogs eventually tire out from playing and Luke is able to clean up. He tells MC he almost had a heart attack when the dogs spilled his bag of flour and says he will send Lucifer a bill for it. He then realizes the dogs are awake and decides to take them for a walk to burn off their energy. He tells MC they can get dinner and dog treats on the way. Outside, the dogs run around as Luke desperately calls them to stay and heel. If MC chooses to help him, Luke will thank them, pointing out the dogs are so energetic that it makes walking them hard work. They manage to get dinner and treats before running into the twins. Belphegor asks about the dogs and Luke reveals they belong to Lucifer. Beel then comments that the dogs smell strange to him.

LordDiavolo I want to see the photo too.

Luke asks what Beel means about the dogs smelling weird, bue he's unable to explain. The dogs suddenly jump at them and Luke chastises them, but Beel says the dogs are merely looking for attention. Belphie agrees, then says he has a feeling he's met them before. Beel tells Luke the dogs smell demonic, which upsets him, so he and MC leave. They run into Asmodeus, who starts taking photos because seeing Luke play with big dogs is too cute for words and a photo of them will go viral. Then Asmo notices their odd smell, saying it's similar to Cerberus', which terrifies Luke. He suggests giving them a bath to make the smell disappear. Luke leads the dogs to a nearly lake, but then notices each of the dogs has a strange mark. MC suggests they ask Solomon about them later.

Back at Purgatory Hall, Luke asks Solomon about the marks, who explains the dogs are bespelled. Luke becomes worried, but Solomon tells him it's nothing serious and will wear off in time. Luke then invites MC to stay overnight. The next day, MC is woken by Luke screaming and a growling sound. The dogs have turned into Cerberus. Simeon is unsurprised, and tells Cerberus that Lucifer has arrived to pick him up. Lucifer greets MC and Luke and thanks them for caring for the dogs. He explains that while brushing Cerberus, the dog's tail had knocked a transformative potion off the table. Luke realizes Simeon knew all along, and Simeon explains that Luke would have been afraid if he knew the truth. Lucifer notes that Cerberus took a liking to Luke and invites him to come play with Cerberus again. Luke is taken aback, but then promises to do so.