View source
watch 02:52
Roblox: DeepWoken - The Loop
Do you like this video?
Play Sound

* To see all of the available cards in the game, visit the Card Categories page.

How to Obtain Cards

Cards can be obtained by summoning them through Nightmare, earning rewards in Pop Quizes, etc.

Cards can also be created by combining Card Pieces, which can be obtained through Nightmare, clearing lesson stages, etc.

There are Card Pieces for both Demon Cards and Memory Cards.

When a player has collected enough Card Pieces, they can spend Grimm to combine the pieces into a card.

The amount of Card Pieces and Grimm needed varies based on the card. 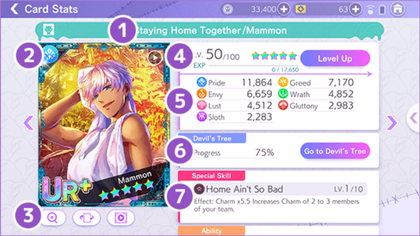 The card's name is displayed here.

Rarity and Rank (✩)
Cards have five different rarity levels. The higher the rarity of a card is, the higher its maximum level and stats will be.

A card's ranks starts off at 0 and can be increased by unlocking the Rank Up spaces in Devil's Tree. When a card's rank increases, its maximum level also increases, allowing it to grow even stronger. The rank of a card is dependent on its rarity.

3. Enlarging and changing the layout of a Card, Viewing Moving Pictures

To change a card's layout, yu have to progress and unlock the Devil's Flower space in Devil's Tree.

Once a card has earned enough experience, it will gain a level and its stats will increase.

The maximum level of a card is dependent on its rarity.

You can also tap the Level Up button and use Grimm to level up your card.

7. A Card's Skill and its Level are displayed here.

Demon Cards and Memory Cards have skills which can activate during dance battles. These skills can increase the player team's stats and decrease the enemy team's stats, among other effects. Skill can be viewed by tapping and holding down a card.

Card skills have a maximum level of 10.

Some Demon Cards have inherent abilities in addition to the standard skills. Abilities are skills that will occasionally activate during battle.

Abilities can be viewed by tapping and holding down a card. The majority of Abilities are used to either cancel or reverse skills first introduced in Season Two (Lessons 20-40).

The two skills used in dance battles are Special Skills and Auto Skills.

Special Skills can be used by tapping on a demon once its gauge has filled up.

Card skills have levels that can be increased by obtaining duplicates of the same card. When the level of a card skill increases, the effect of the skill also strengthens.

After maxing out the skill level of a card, if the player obtains another duplicate of the card, it will turn into Raven.