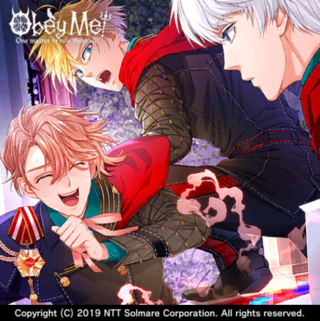 DDSimeon I thought it looked interesting.

In class, Satan notices that the chocolate hype seems to be over. Asmodeus is a bit disappointed - he was enjoying it. Solomon joins their talk and offers them chocolate made by the Purgatory Hall residents - the bag he has however contains only chocolate made by him. Apparently, Simeon and Luke managed to convince him to give away the chocolate he made. As MC and others look at the chocolate, they get pale - baffling Solomon with their reaction.

Solomon urges everyone to eat up and tells them that the chocolate is delicious. The chocolate looks fine, but Asmodeus is aware that it probably tastes good only to Solomon. Asmo, Satan, and MC try to think of a way to refuse and get out of the situation, but end up simply running off. Solomon runs after them.

Satan, MC, and Asmodeus run from Solomon who’s slowly catching up to them. Satan wonders if Solomon is even human since he got to them so quickly. The sorcerer is annoyed that he went out of his the way to give them the chocolate and they ran so he casts a spell and manages to strike down Satan. Asmo flees despite Satan’s plea for help. Solomon feeds the captured Satan chocolate which makes Satan pass out after an anguished scream. Solomon’s next target is MC.

LordDiavolo I wouldn't mind trying it.

Solomon wants MC to eat the chocolate for him. Asmo who managed to flee, comes back seeing MC in danger of the chocolate and sacrifices himself. He voluntarily eats some of the chocolate to make a chance for MC to escape. He has however one last request for MC - he wants them to take his picture so everyone can remember him in his whole beauty. Solomon however feeds him chocolate beforehand and Asmo passes out with a scream of pain. Solomon apologises to MC as he sees it was the last piece of chocolate he had - he however promises to make enough for MC next time. Solomon leaves. The next day, both Satan and Asmo are silent and absent-minded, deciding that they don’t want to see chocolate ever again.