View source
watch 02:52
Roblox: DeepWoken - The Loop
Do you like this video?
Play Sound

Within the Your Tasks app, you can spend AP to enter into battles. Winning battles will reward you with Player and Card experience (EXP), Grimm, and various items that can be used in Devil's Tree.

You can see the available rewards from the Preparations screen. 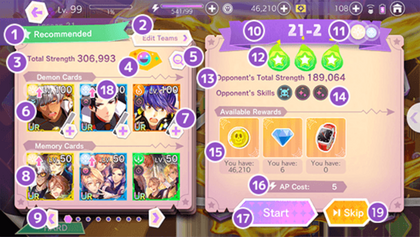 By default, the most effective cards will be chosen for you.

You can choose the cards you would like to use in battle. You cannot set more than one Demon Card of the same character on a team.

This shows the combined power of all of the cards on your team for this stage. Glow Sticks can be used to increase the Total Strength of your team.

This indicates how likely you are to win the battle. It comes in four different types.

Shows the Demon Cards currently on your team. Tapping and holding down on a card will move your to its Card Stats screen.

Pairing a Glow Stick with a Demon Card will increase its strength for the duration of the battle. Glow Sticks come in two types: character-specific (colored) and Rainbow, which can be used on any character. Rainbow Glow Sticks increase strength more than other Glow Sticks.

Shows the Memory Cards currently on your team. Tapping and holding down on a card will move you to its Card Stats screen.

Change teams using the left and right arrows. You can add to and replace cards of a team using Edit Teams.

Shows the name of the stage you are currently on.

Shows you the attributes of the current stage. Choosing a card with the matching attribute will give you the best chance of winning.

The default recommended team will prioritize the stage's attribute when choosing cards.

Shows the battle results for the current stage in ★

Shows the combined power of the opponent. If your Total Strength exceeds the opponent's, your chances of winning increase.

Shows the skills that your opponent can use in battle.

Shows the amount of AP required to battle.

Tap to start a battle.

When this button appears, you are able to skip the battle. This button will appear when your team's total strength is much higher than that of your opponent. 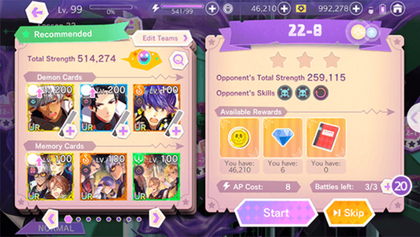 Battle Spaces in Hard Lessons can only be attempted three times in one day. The number of battles left is shown to the right of the AP cost.

The number of battles left is reset every day at 7 am PST / 12 am JST. You can use Devil Points and D-Energy to reset the counter.

You can also watch videos to get more battles.

You can edit your team and choose up to three cards for battle. The most effective cards are chosen for your by default, but you are free to choose from any of your available cards to form a team.

How to Edit Teams 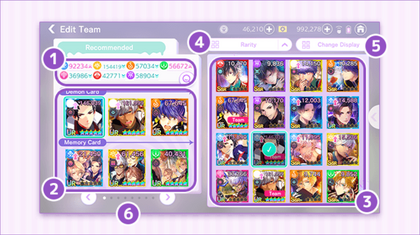 First, choose a Demon Card currently on your team (2) to replace.

Then, choose a Demon Card from the list on the right (3) to put it on your team.

Tapping the Edit Team button in the top-left corner will confirm any changes that your have made.

1. This shows the total of each attribute value for the cards on your team. The sum of these attribute numbers is a card team's Total Strength.

2. The cards on the currently selected team.

3. Shows all of the cards in your posession.

5. Change how your cards are displayed.

6. Form a new team using the left and right buttons.

There are two conditions that must be fulfilled to win a dance battle.

If one or more of the conditions above are not met, then you will lose the dance battle. You will still earn experience after losing a battle, but it will be at a reduced amount.

When the gauge below a character has filled, TAP! will appear.

Tapping the character will activate their skill. Skills vary by character and by card.

Activating two or more skills at the same time will result in a combo that will increase the skills' effectiveness.

Hearts will sometimes appear during battle. You can increase your score by tapping on a heart or dragging across a row of them.

While Fever Time is active, stars will appear that increase score more than hearts.

Occasionally activates near the end of battle. The characters' dancing reaches a fever pitch, and score-granting stars appear more often. 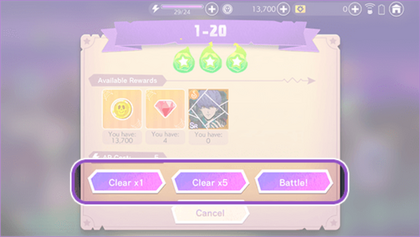 If you obtain 2 ★ or more in a battle, you will be able to use Quick Clear. Quick Clear allows you to quickly gain player experience and rewards.

Tapping the Battle button will take you to the Preparations screen.