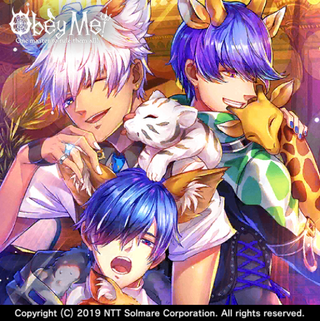 Mammon wants to play a new racing game that Leviathan bought, and as the game requires four players, convinces both Leviathan and Belphegor to visit MC's room and have them play too. The game allows players to use animal abilities, and because Leviathan bought the limited edition version it also came with sets of animal ears and tails. Mammon chooses the tiger set, Belphegor the fox, Leviathan the giraffe, and MC can choose to be either a rabbit or a dog.

AsmoBaby Oooh, me too! Me tooooo!

A fight immediately breaks out over who will sit next to MC, ending with Mammon and Belphegor sitting on either side of MC and Leviathan sitting behind them. This doesn't work out well, as both Mammon's and Belphegor's tails keep getting in Leviathan's way so that he can't see the TV screen. Both tell Leviathan they can't help it because they don't control how their tails move, and that because he's so great at games anyway he needs a handicap.

ButlerBarb He seems okay despite los...

Leviathan's anger increases, but his brothers show no sympathy and tell him it's his fault for choosing to sit behind MC. Leviathan argues that Mammon and Belphegor hogged the spots next to MC so he had no other choice. He calls a time-out on the game, only for Mammon to change the subject and complain that the game is just a rip-off as all the racetracks are the same. Leviathan agrees, but then Mammon notices MC staring at his tail and asks if they want to touch it. That's when Belphegor's tail "just happens" to wrap around MC, which is odd because he claimed he couldn't control how his tail moved earlier.

Leviathan states that he's fluffier than he looks and asks if MC wants to touch his tail too. He says that he'll let them only if they beat him in a race, then challenges MC to a one-on-one race with him. Both Mammon and Belphegor root for MC to win, but they end up losing to Leviathan...who lets them touch his tail anyway. The other brothers feel jealous, so they try to convince MC they'd rather touch their tails than Leviathan's. Leviathan brings the topic of conversation back to the game, which he continues to berate and complains that the developers focused on gimmicks over gameplay. He also points out the company did something really similar for their previously released game. As he continues with his diatribe, Mammon loses interest and decides to take a nap instead. Belphegor is way ahead of him and already asleep.