All I Want for Christmas Is You/Devilgram

< All I Want for Christmas Is You
View source 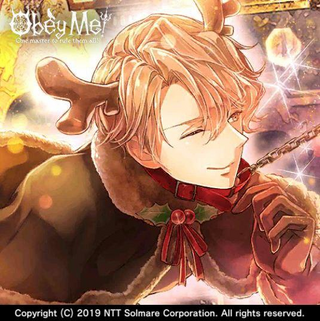 L3V1 I can't wait for the holiday-edition...

Asmo is very chipper in the morning and explains that it's because the holiday season is coming up. Satan is surprised at first but remembers that the human world indeed has a holiday soon. Levi is looking forward to holiday-edition capsule toys. Asmo though announces he'll spend Christmas with MC, alone. This upsets Mammon but Asmo claims he won't let anyone disturb them. Belphie, Beel, and Levi get upset too as they don't want Asmo to hog MC to himself. Lucifer asks MC for their opinion, which can be positive or negative depending on the chosen option. If MC chooses to be upset that they weren't informed beforehand, Asmo doesn't see a problem as he informed them just a moment ago. Mammon and Satan aren't pleased with the situation, along with Levi and Belphie. Lucifer cuts off the discussion, as they need to head to class and they'll discuss the matter later.

monSOLO That's only part of the whole...

In the classroom Asmo continues the topic with MC, complaining about his brothers’ meddling being unreasonable because he's the most attractive of all of them and therefore MC definitely would enjoy the most being around him and should spend Christmas with him. He thinks Christmas is about couples spending time together alone. This claim angers Luke and Simeon who were nearby in the classroom.

DDSimeon Did you hear anything of...

Simeon gives Asmo a basic synopsis about the history of Christmas. Luke compliments Simeon on how easy to understand and accurate his explanation was, and demands that Asmo confirm that he now understands how unique and sacred the holiday is. Asmo doesn't answer, lost in thought. It turns out he was thinking how perfect he is upon noticing his reflection in a window, and starts rambling about his own beauty. Simeon suspects Asmo wasn't listening at all, but Asmo says that he actually got the main idea - that it's a day you spend with those important to you. So he concludes that his concept of Christmas was from the beginning quite accurate. Asmo then has an idea.

Lucifer Asmo must have something...

Asmo prepares a Christmas party for all his brothers, as well as Simeon, Solomon, and Luke, as Simeon's explanation made him realise he has a lot of people he cares about. Levi is grossed out by the fact Asmo seems to have understood the concept of brotherly love. Satan, Belphegor, and Lucifer all doubt Asmo's intentions though. Asmo asks MC to bring drinks and secretly follows them to the kitchen. Simeon's explanation actually made Asmo realise that he wants to spend most of Christmas with MC as they're the most important person to him. He explains that he plotted the party to distract the others because otherwise they'd interfere. At a party however, they're too busy, so Asmo can sneak out to spend time with MC. He wants to share a drink with MC in the kitchen and wish MC happy holidays.