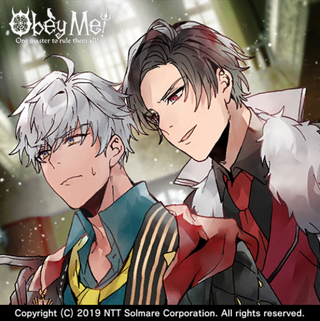 Mammon comes back to the House of Lamentation after gambling away all his money. He suspects that one of the players was cheating and had accomplices and decides to find proof and make them pay double. He notices that the mail has arrived and checks if there are any letters about his debts so he can hide those from the others, but finds only one letter addressed to him. The letter was sent by Diavolo and actually has Lucifer as the second recipient. Out of curiosity, Mammon opens it.

Mammon reads the letter and decides to pretend he has never seen it, but Lucifer spots him. Lucifer knows what the letter is as he knew Diavolo was making plans to invite them to a formal dinner party.

AsmoBaby But I'M the one...

Mammon claims there must be a mistake as he doesn’t understand why Diavolo would want him of all the brothers at a formal dinner party, and firmly refuses to go. Mammon claims that it’s going to be a hassle and insists that Satan or Asmo are better suited for such an event. Lucifer admits that he doesn’t want to take Mammon to such a party, but there’s no choice as it was Diavolo’s decision. Mammon still argues that he isn’t the type to blindly obey whatever Diavolo says, Lucifer however tells him that Diavolo is the only one who ever cared about him and that this gives Mammon a great chance to grow his power and influence.

stn If you put your mind...

Lucifer convinces Mammon by explaining that he’d be publicly recognised as the number two of the demon brothers if he goes - if not, he’d give up the position to Satan or Asmo. Mammon agrees and expresses how the responsibility might be too much for the younger brothers to handle. However, he requires some etiquette lessons - which he understands and is okay with, but Lucifer wants to start right away. That makes Mammon doubt his intentions as he suspects that Lucifer went along with the plan only to be able to train and punish him. The lessons don’t go smoothly but on the night of the party, Mammon’s manners are flawless. Diavolo is genuinely impressed by Lucifer’s “magic” (which was intensive training), but Lucifer cannot guarantee what the “aftereffects” of the spell will be. Barbatos confirms that Mammon was indeed acknowledged by the guests as one of the seven great demon brothers.