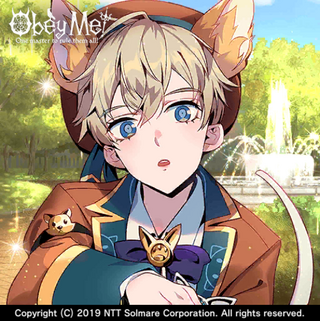 DDSimeon Luke can do it.

During the filming of the animal movie it’s time to shoot Luke’s and MC’s scene - one where Luke’s character is feeling helpless and MC cheers him up. Luke however is nervous and wants to go through the script one more time. The scene starts with Luke feeling bad about being the weakest member of the pack. MC can choose to either follow the script or pat his head. The filming goes smoothly, and after the scene’s done, Luke praises MC’s acting - he really felt like they genuinely tried to cheer him up.

Mammoney Because he's a Chihuahua.

Luke is tired after the scene has been filmed, so he suggests taking a break and finding some snacks and drinks. Simeon and Solomon confirm that there are plenty of refreshments available, Simeon also says that the dog costume fits Luke well. That makes Luke angry - he's annoyed that he's a puppy. But when Solomon tells him to shake, he does shake his hand - which only embarrasses him further. If MC tells him it's adorable, he gets flustered and claims he doesn't like to be called adorable for that. Soon Simeon's break is about to end, so Solomon suggests that Luke and MC take a walk. Luke likes the idea.

During the walk Luke is a bit disappointed that there's nothing interesting to see around, but enjoys that it's quiet. He still complains that he gota boring role, and that he has to play a dog on top of being constantly called a Chihuahua. If MC agrees with him what he could play something else, they can choose to describe it as small and cute or as a ferocious carnivore. If MC tells him that it suits him, he replies that he doesn't mind it so much if MC praises him. He would though prefer to be a large dog, like one of the big fluffy or black guard dogs, so if there's going to be a sequel, he wants to be cast as something cooler. He also hopes that MC gets to play an animal too. MC can choose then to agree or prefer playing a human again.

Luke opens up to MC about not having had confidence in his acting, but MC's support in their scene made him feel cheered on and boosted his confidence. He thanks them for that. Nearby bushes rustle and he immediately tells MC to hide behind him, but it turns out to be just wind. Luke is however glad that he managed to act quickly and shield MC - he confesses that he is aiming to become more reliable since up to this point MC was always the one helping him out. He wants to become stronger so he can protect them. MC can choose to encourage him or tell him they prefer him the way he is.