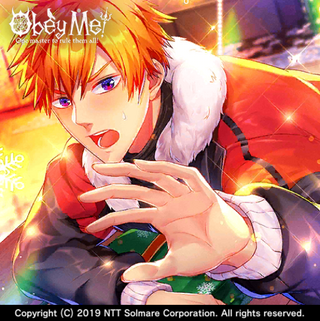 MC intends to gift a present to Beelzebub although the demons don't celebrate Christmas in Devildom. MC asks Belphegor what Beel would like to receive; Belphegor first suggests food before admitting its best they approach Beel directly. MC finds Beel in the sitting room. If MC chooses to ask what Beel has been into he is taken aback but admits he likes Devilcat, telling MC about the new Devilcat merchandise that was released. He wants the Limited Edition Devilcat Santa plushie but he's overspent on food for the month and can't afford it. Beel then reveals he has to go grocery shopping in town: Christmas is gaining popularity in Devildom and the town has been decorated for Christmas. Beel wants to walk around town and asks MC to accompany him. He decides to get ready and asks to meet MC in the entrance hall.

Beel is excited, saying the town really looks Christmassy. He admits when thinking of Christmas he thinks of presents. MC can choose to ask if any other thing comes to mind; Beel mentions Christmas desserts and trees. He asks MC what they want for Christmas. If MC admits they don't really have anything Beel is disappointed but soon notices something has caught MC's attention - a music box with an interesting design. Beel asks if they like it but suddenly recalls he was asked to find something. He asks to split up for a bit and apologies for having to leave MC alone. They decide to meet later at the central plaza. MC runs into Luke while looking at Devilcat merchandise. Luke is surprised at MC's interest in Devilcat. Both are dismayed by the price of the plushie. MC later meets up with Beel who has a big bag with him. MC can choose to ask what's inside. Beel tells them it's for Belphegor and they head home together.

SUMMARY TO BE ADDED
That is less than 150 words.


Stories in complete dialogue form violates NTT Solmare's Content Terms of Service and Use. Such content will be removed without warning. The Obey Me! community values your help.

stn That present is going to make...

SUMMARY TO BE ADDED
That is less than 150 words.


Stories in complete dialogue form violates NTT Solmare's Content Terms of Service and Use. Such content will be removed without warning. The Obey Me! community values your help.